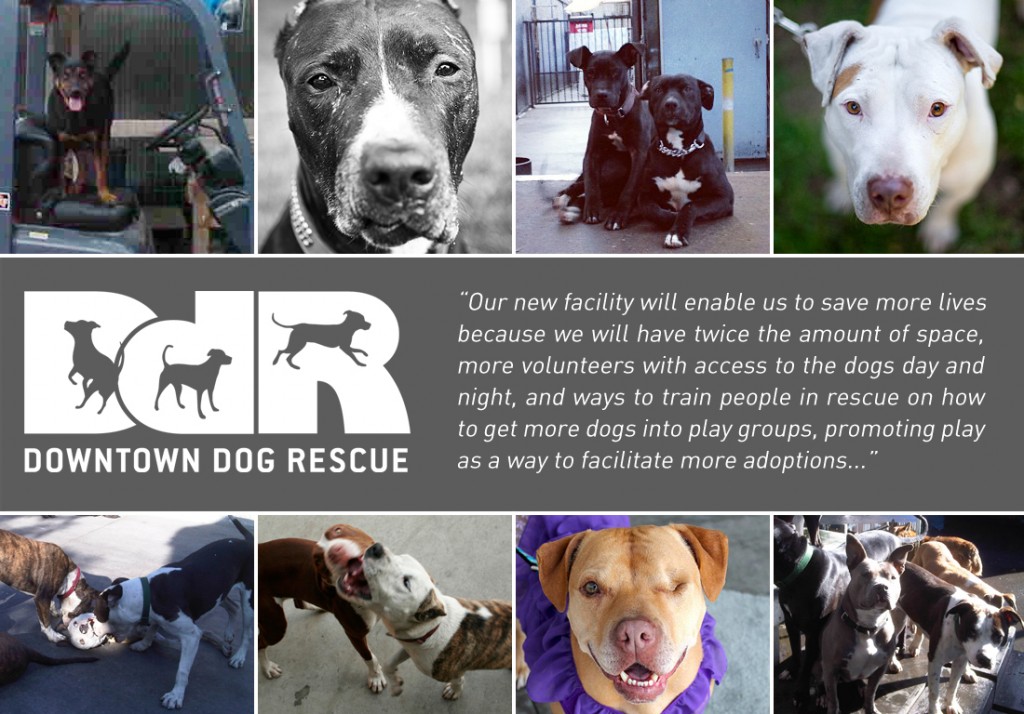 In less than a month, the Downtown Dog Rescue kennel will be relocating to our new home in South Gate, California. Thus starting a new chapter in saving animals lives.  We’ve come a long way from our early days of rescuing mostly former guard dogs and countless pets belonging to the homeless community of Skid Row. Some of whom are still DDR residents.

Not exactly what I would call “highly adoptable” dogs. But, almost two decades ago when we started DDR, our focus wasn’t about increasing adoptions. It was simply about  reducing the number of stray dogs on our block. One dog at a time, with no real plan for the future. While we still concentrate on one dog at a time, the 3000 plus dogs that have once called DDR their temporary home, have all gone on to find forever homes with their new packs/families or become a permanent part of the DDR family.

How have we been able to operate on a small budget and grow organically each year while addressing more community challenges? It’s been the relationships formed with people in animal welfare, including the support of larger organizations, all working together in collaborative ways that have had a profound positive impact. These relationships allow DDR to do so much more than would otherwise be possible. One of the relationships that has been important to our progress over the past decade has been with Best Friends Animal Society.

When co-founder Francis Battista and his team first came to Los Angeles to visit Dog Man’s Training class and the DDR kennel, I wondered why would an organization like Best Friends be interested in someone like me, who had a small kennel in a parking lot in the back of a woodshop?  That’s all our kennel was and still is, a series of dog runs, in the back of Modernica’s old wood shop, where the dogs run around in what was once a parking lot.  However, they saw my vision and encouraged me to do more and to not give up. Eventually, I was invited to speak at one of the first No More Homeless PetsConferences, then, another one and another one. But perhaps the greatest honor was when I was asked to be one of the founding members of the NKLA steering committee.

While on the NKLA committee, one of my biggest accomplishments was taking what is now known as the South LA Shelter Intervention Program from an idea on paper and turning it into a discussion with the other members of the NKLA steering committee, as to how to get the program funded and functioning properly.

With the modest goal of keeping a few hundred pets out of the South LA shelter, it was the Best Friends team, who listened to what I needed and worked quietly behind the scenes to make this program happen. A program that is a collaborative effort with Found Animals Foundation, successfully preventing more than 1000 pets from entering the South L.A shelter since its launch on April 6, 2013.

It’s one thing to have a vision for preventing pets from entering the shelter, as I did for many years, but it was essential to have the assets and connections to breathe life into the program as the Best Friends team did. When the time came to create a plan where DDR could buy a property instead of leasing one, keeping our programs centered on the community instead of constant fundraising to pay an expensive lease, Francis was the first person I called to help take my idea from a dream to reality.

Our new facility will enable us to save more lives because we will have twice the amount of space, more volunteers with access to the dogs day and night, and ways to train people in rescue on how to get more dogs into play groups, promoting play as a way to facilitate more adoptions. All while still being in close proximity to the South LA shelter, our home base.

Because we will not be paying a lease each month, DDR will be able to provide more spay/neuter surgeries, more community dog training, and a place to temporarily house some of our shelter intervention dogs. The new kennel will be a forever home for Downtown Dog Rescue due in large part to the generosity of Best Friends’ donation of $100,000. Our vision for education and change in the communities that we serve are the constant focus for the next chapter in the history of Downtown Dog Rescue.

We need your help to purchase a permanent home for DDR by August 26th, 2013. You can make a difference in a dogs life by clicking the link to donate/sharing on Facebook: http://bit.ly/16kmjno