As dog guardians, we accept certain responsibilities.  We pick up poop, we shove pills down throats, we clean up vomit.  But, none of that really matters: the goo, hair and smell are small prices we pay for wiggly butts and sloppy kisses.  But there are a few things that we dread; those vet visits that give us chills, when we know something is wrong and we can’t explain it to our beloved furry friends. 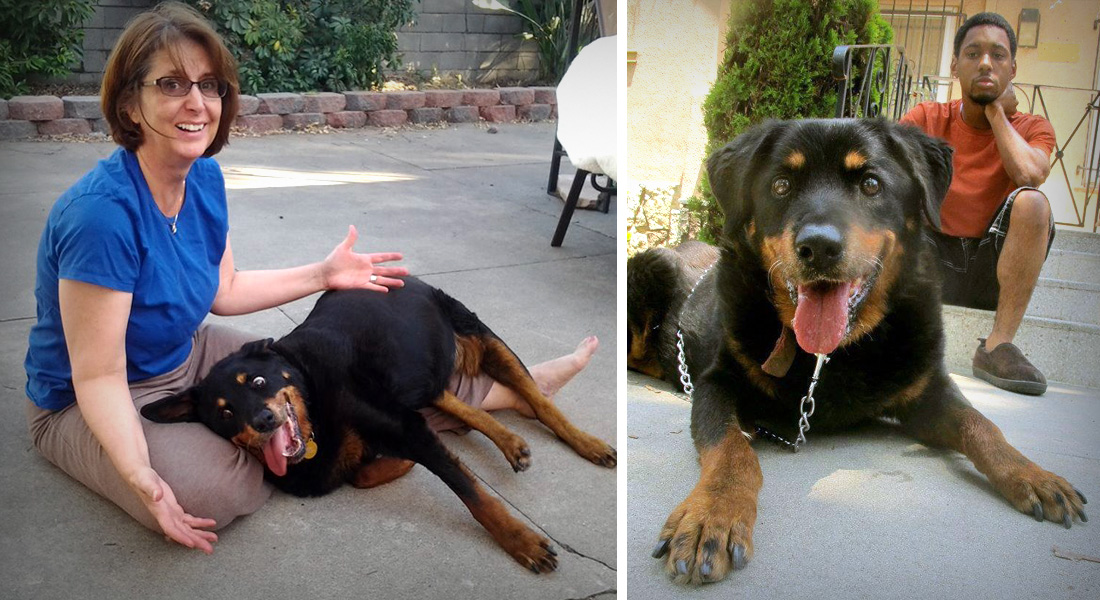 Our journey started in July of 2013 when a post by Downtown Dog Rescue (DDR) hit Facebook about a 13 year old Rottweiler, named Ryoko. Rodney, her guardian had received a college scholarship, and no one within his family was physically or financially able to take care of her.  So, out of options, Ryoko was taken to the South LA shelter, Rodney hoping someone would adopt her.  But most of us know the likelihood of a 13 year old dog being adopted in a low income area is not good.  Fortunately for Ryoko, DDR had established their Shelter Intervention Program just months earlier.

Rodney, believing this was the last time Rodney would ever see his girl, was crying as he walked towards the shelter. However,fate intervened. Seeing the banner by DDR offering help, they walked inside and met Amanda Arreola.

Amanda listened to their story and asked if they could hold on to Ryoko for a bit longer, DDR would reach out to their rescue partners and social media to see if a foster/adopter could be found. Thankfully time was on their side. 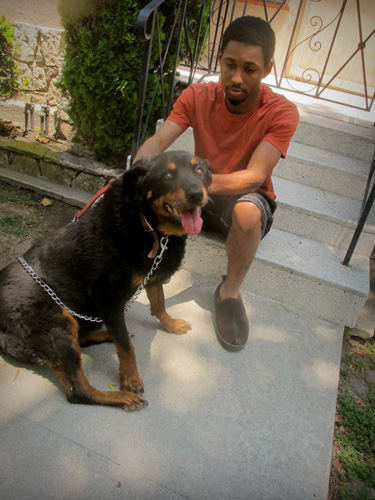 I saw the postings on Facebook about a sad owner and a happy dog. The pictures said it all, Rodney knowing a decision would have to be made, the dog just happy to lay next to the human she loved. The pleas to help Ryoko went on for several weeks, but no one stepped forward. People cared, and wished them the best, said prayers, kept their “paws crossed.” But no real offers of help emerged.

After seeing the pictures for weeks, I finally caved, and asked my family if they would consider taking on another dog. My husband, eternally supportive, responded “whatever you want my sweet.” I know that sounds corny, but that is how we are with each other, when something really matters to the other we are supportive.

That weekend we drove from the San Fernando Valley to South Los Angeles to meet Ryoko.  Hillary Rosen, who was also at the shelter the day Rodney was there, met us at Rodney’s home.  Ryoko was out in front just as she was in the pictures, Rodney looking dire.  We talked.  He was worried –after all we were pretty much their last hope.  But I knew it was right when that place in my heart lit up.

I can’t help it, I love the senior dogs (she was our fourth “special case”) and this was a rare opportunity to not just help a dog but her loving guardian as well.  We had the ability to lift a great weight from this young man’s shoulders.

A week later we took Ryoko to the vet, and her blood work was excellent. So we all went back to my house.  I told Rodney he could stay as long as he wanted that day, that it would probably be a good idea for him to come in and out of the yard several times so she wouldn’t be too worried when he finally left for the day.  He stayed 7 hours.

During our visit we talked a great deal.  He was truly a good person, and I liked him.  We actually had a lot in common and talked, not only about dogs but about movies, graphic novels, musicals, school, being out on your own, etc.  Towards the end of the visit I let him know my door was always open, he could visit his girl anytime.  So he wasn’t saying good-bye; Ryoko was still his baby and he could look at our house as her ‘retirement home.’

Thankfully my backyard has two dog runs, allowing me to keep my dogs and Ryoko separated while they all got to know each other.  After 3 weeks, we started to let them all mingle while we supervised.  Ryoko came through like a champ.  She was pretty unfazed by all the running around and the barking of my own dogs.  She was happy to have a warm soft place to lay down on and a toy to carry.  In fact, she was quite the toy “hoarder,” often even carrying them in her mouth during walks (talk about cute!).

So Ryoko become part of the family, and we kept a routine in place for her.  Breakfast and dinner she was up, standing by the door jumping about like a puppy.  Or she would be on her bed, favorite toy in her mouth, showing it off proudly.  She would walk over to me, leaning her massive 80-pound body against my legs, nudging her head up to be pet.  Occasionally, if I wasn’t quick enough while kissing her forehead, she would slam that big anvil of a head into my chin!  At night I would go outside with my iPad to watch TV with her. This was cuddle time, and then before I’d go inside she’d get a “bed time” cookie.

I called her my angel — she was better behaved than my own dogs!

But on January 21st she didn’t eat.  I told myself “it happens.”  But after two days of just a nibble I knew something was wrong.  I took her to the vet and my suspicions were confirmed.  She had massive tumors throughout her abdominal area.  Surgery was not recommended due to her age and other potential risk factors.

I wasn’t upset. I knew this day would come, I just hoped I would have had longer with her.

I let Rodney know that she wouldn’t have much longer.  Her greatest risk was a ruptured spleen and internal bleeding. He was devastated.

So I was faced with the “when” decision, and selfishly I wanted her for as long as possible.  But the reality was that any “tomorrow” could be her last day, I could walk out the door to find her already gone, having passed alone in the night.  I couldn’t face that.  No one should be alone. 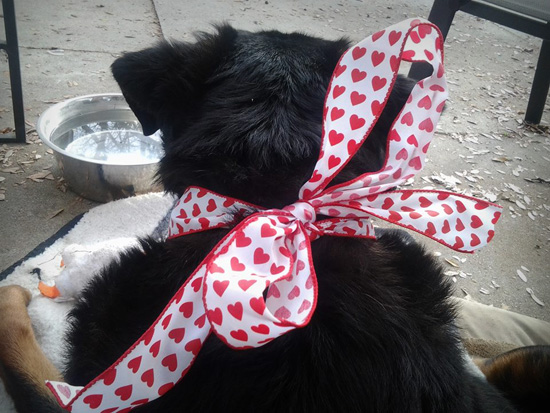 My vet kindly agreed to come to our house.  On Friday morning, January 31, 2014 Ryoko left us peacefully, surrounded by her favorite toys, a white ribbon with red hearts tied in a bow around her neck, “Ryoko you are loved” written on it.  The vet gave her the first shot… her head bobbed to and fro, then the second shot… her breathing slowed, her tongue lolled slightly outside her mouth and her head rested on her right paw.  My husband sitting to her left, I was laying down, wrapped along her, my head at her paws.  With her last breath, her muscles relaxed, her head sunk deeply down and she was gone.

The next day I dreaded entering my backyard, I would no longer see her on her bed, favorite toy in her mouth, showing it off proudly.  She wouldn’t walk over to me, leaning her massive body against me, nudging to be petted.  She wouldn’t be at the bottom step, ears forward, front legs placed solidly showing off her broad chest then, bounce around like a puppy. I no longer have my late night TV buddy, nor will she throw her body on top of mine so I couldn’t move, nor make me laugh with her goofy smile. 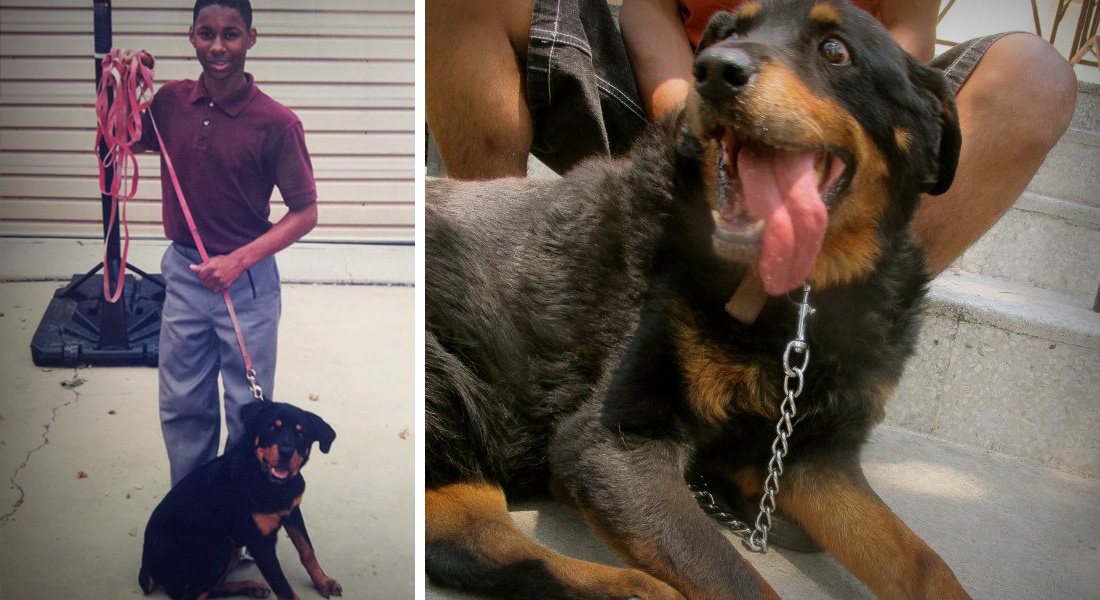 I loved — no, love — this dog.  I love Rodney for trusting me with this wonderful soul.  And I am thankful for Lori Weiss, Amanda Arreola and Hillary Rosen, for not giving up on them, I am thankful for the South Los Angeles shelter for allowing the program, and for the funds raised to keep it running, and of course, my family for opening our house up to yet another senior dog.  Without all of these pieces falling into place, this gentle soul would have ended up alone and frightened in a shelter on her last days.  I am overwhelmed by sadness that she is gone, but if we hadn’t taken her in, I would have never experienced such joy.