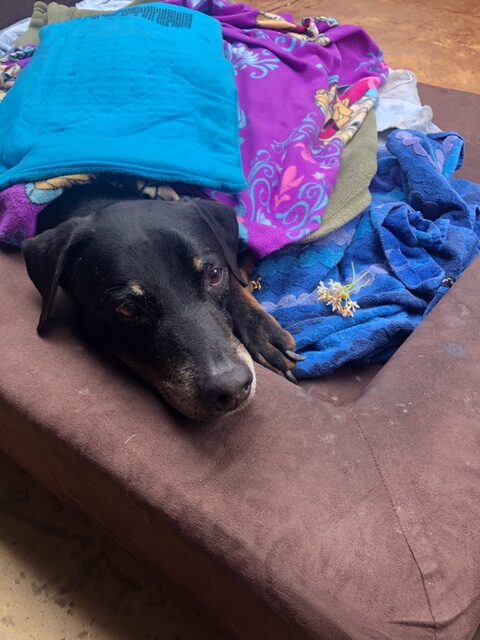 DDR supporters, I want to share a story about a very special dog named Larry.
It was the fall of 2009 when I first met Larry – chained to a phone pole with no shelter, no water, and no hope.  He was one of over 100 “rescue dogs” on a large “kennel property” in South Los Angeles run by a Diane B. Carey and her non-profit, South Central Stray Rescue.  Diane was later prosecuted on animal cruelty charges and lost her ability to practice law in California, all due to this case. Thinking that I was helping an overwhelmed good hearted rescuer who was in over her head, I soon realized that this property, and everything that was going on, was a far more complex situation. Later, DDR would become involved in prosecuting the people involved in running this operation.

Each weekend I would volunteer at the “rescue” situated in an industrial area off Central Avenue.  As I arrived, I would hear the barking and smell the filth of uncleaned makeshift runs. Some of the dogs were chained to non-operational motor homes and others were grouped in areas with very little, if any, space to exercise. Surely this was illegal.  Wow, did I have a lot to learn.  I quickly discovered that the kennel requirements for the City of Los Angeles had not been updated since the 1950’s.  Other than the chained-up dogs, this organization was not breaking any laws.
This case became my life for six months. My mission was to get every dog off the property and into real rescues and foster homes one dog at a time.  DDR had an amazing group of volunteers who also dedicated their time to get the dogs out anyway they could. 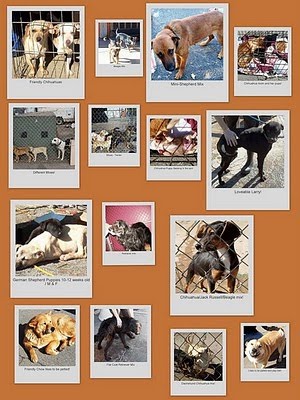 Some of the over 100 dogs that we rescued off the property. 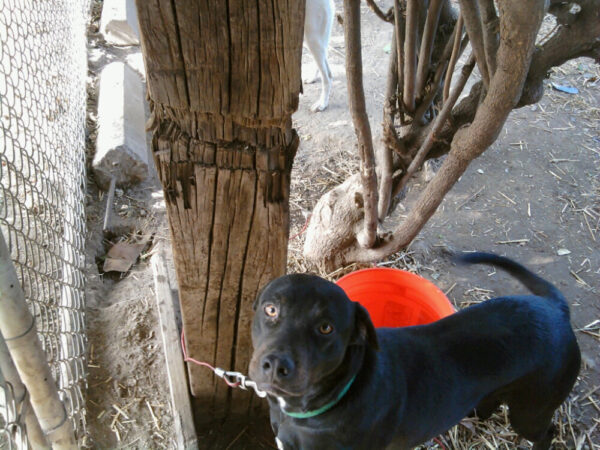 Photo taken of Larry right before he was rescued

Larry was the first dog that I felt deeply connected to. I met him on a Saturday morning and when I saw his pleading eyes, tears flowed from my eyes. While the situation was emotionally overwhelming, I somehow focused on getting Larry out and into my car.  I was told by the man working at the kennel that Larry was a “problem dog”  because he had too much energy and constantly wanted to jump the fence.  Offering to take Larry off their hands, no one at the facility objected.  So, Larry was riding in my car, back to our old DDR kennel on 7th Place and Santa Fe.
Larry thrived at our kennel and was quickly adopted by a wonderful woman who promised to always give him the space he needed and to love him forever.  She kept her promise, and we stayed in touch over the years.  In fact, after she adopted Larry, she married, had a beautiful baby daughter, and adopted a companion dog from DDR that I personally delivered to their home to make sure that Larry approved of named Darla.
This past week I received a text. Larry had left this world.  In his last hours, he was surrounded by his adoring family, beautiful flowers so he could smell something he liked, and a heating pad and blankets to keep him comfortable right up to his last breath.  To write that his family loved him is an understatement – they ADORED him.  No dog will ever replace Larry.  He was, as every dog is, a unique and wonderful being that connected to a special family.
We will never know who owned Larry before he was “rescued” by the nonprofit on 61st Street, but I did see how many of the dogs on the property came to live there.  They were dropped off by their families – not because the people didn’t love them, but because they could not afford to feed them, to care for them.  You see, they thought they were giving their pet a better chance at this “rescue” because they believed the South LA shelter would automatically kill their dog.

Over and over, it is the same story.  The very poor pet owners had no resources to go at that time.  I still remember meeting families at the front gate, before they walked on to the property and with dogs still in their cars.  I explained the situation and how their dog would suffer.  For the few that agreed, we loaded the dogs up into the empty crates in my car so they could really be rescued and loved.
The longer I worked on this case, the more I continued to question the word “rescue”. What was going on at that facility was definitely not rescue, but was I recycling more than rescuing? Going forward, it was clear that South Los Angeles desperately needed more resources.

In 2013, partnering with LA Animal Services, DDR started the first shelter intervention program, which has now prevented more than 14,000 cats, dogs, and rabbits from entering the South LA Shelter.   Instead, these animals remain with their loving families.  In 2014, the ASPCA opened a free spay and neuter clinic on site at the shelter.  Increasingly, mobile spay and neuter has been made available over the years as well as free surgeries on a mobile clinic run by Sam Simon.

Our recently opened Pet Support Space is the latest advance in bringing more services such as on site mobile spay and neuter + medical grooming, veterinary vouchers for co-pay treatment and crisis care, pet food pantry, on site counselors six days a week, and resources such as access pro bono legal support for low income pet owners so they never need to go to the shelter, or worse become homeless.
To remember Larry is remembering how far we have come as an organization, providing services and as a part of a much larger group of organizations dedicated to helping families with pets. I will always love Larry and will never forget the day I unhooked his chain from that phone pole, and told him, “Hey buddy, your life is just about to get a whole lot better.”      Rest in peace sweet Larry.
If this post touched your heart, please respond by sending me an email Lori@Downtowndogrescue.org
Gratefully,