This author has not yet filled in any details.
So far Lori Weise has created 2 blog entries.

This month, we were back on the corner of Central Ave and Industrial Street, with our counselors and the Los Angeles County Veterinarian team, offering supplies and services to pets who live in the Skid Row community. A total of 75 pets received services (40 dogs + 35 cats) The line starts to form at 9:00 am, when clients and volunteers unload the supplies and set up our tables, for our official start time of 10:00 am. Pet owners arrive throughout the morning, receiving monthly food supplies, veterinary vouchers, flea and tick prevention, and an opportunity to check in with our counselors. 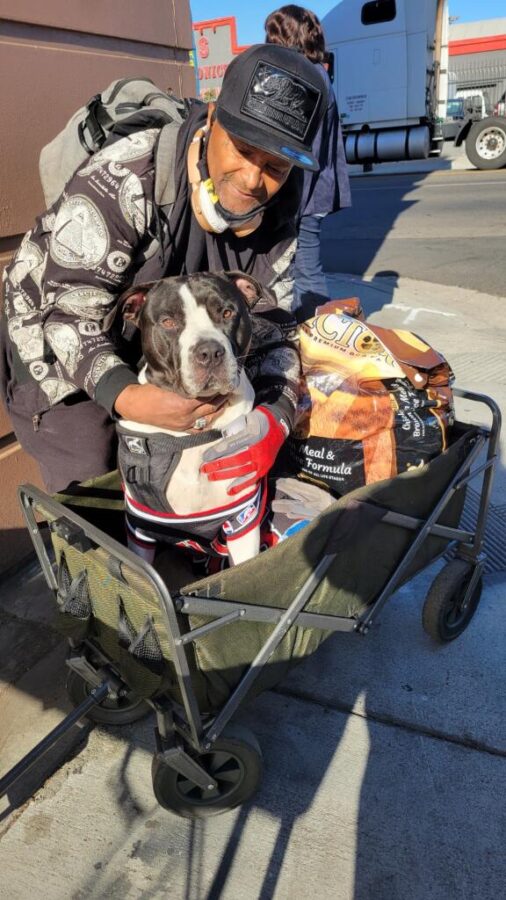 Checking in means more than “getting free stuff”, all of our counselors are there to support the pet owners just as much as their pets. This involves doing more listening than talking. Sometimes, the topic has nothing whatsoever to do with pets. Some people drop in because they are feeling sad, depressed, may have lost a loved one, whether two legged or four legged, and need a compassionate person to “be there for them”.

All of the services that we offer, we offer in a manner of trauma informed care. Always remembering that these three factors impact our clients’ lives, and lead to stress; uncertainty, lack of information, and a loss of control. By explaining options, offering choices, taking time to explain the information helps our clients feel more in control of their pets’ lives and in turn their own lives. In addition to promoting healthy pets, the benefits of spay and neuter, our goal is to always help our clients see that they have options, they have our ongoing support because we all need help sometimes.

The Universe Has A Plan

I decided to write this blog post in order to share a particularly cool story, but also to remind me that when I get out of my own way and allow the Universe to put a plan into motion, things work out really great!

Trusting in a Higher Power, God, The Universe is something that is fairly new to me.  For many years, I guess you could say that I was faking it – meaning, I was saying that I trusted a power greater than myself, but I really didn’t.  I was that person who always had to feel like she was in control, even when life seemed out of control.  I was always that person who had a back-up plan for her back-up plan.

Fast forward to about a month ago:  lying in bed surrounded by dogs, reading emails on my iPhone, one message catches my attention.  It began with a plea for help, but didn’t stop there.  In great detail, she was honest about her living situation, her love for her dogs, and what she was willing to do to get help.  The part that really irked me was her detailed description of the type of food she was looking for in a donation. She only would accept vegan dog food. Reading this, my initial thought was, “Well, if I couldn’t afford to feed my dogs regularly, would I really be concerned about the dog food being vegan?” No, no I would not.

The email went on for a couple of paragraphs, she seemed like a nice lady but she was out of our service area and she seemed too organized and thoughtful.  Someone would help her because she was resourceful – clearly not a DDR type of client.  I thanked her for her message, explained that “we never get vegan dog food”, and wished her well.

The very next day, I received an email from Diana at PETA, who was writing because she had a big donation of vegan dog food to share with DDR if we needed it.  I was stunned! Yes, of course we will take it, I replied.  We met up later in the week and unloaded cases of vegan dog food kibble.  I had to acknowledge this was more than a coincidence.  I emailed the vegan dog food lady, so excited to let her know I had food for her dogs.  I  never got an email back.

About a week later, I received a text from her.  It went something like this:  Sorry for the late reply. It is difficult for me to read my emails because I am not living in a permanent home.  This pet owner had been living in her car with her three dogs, using the Safe Parking program until she was recently accepted into the Project Room Key program.  Her situation of  homelessness was a result of being a domestic violence survivor who lost it all when she left her abusive situation.  That is about all that […]