Downtown Dog Rescue is a 501C3 non profit that provides access to veterinary care for pets that live with families who identify as homeless or low income. 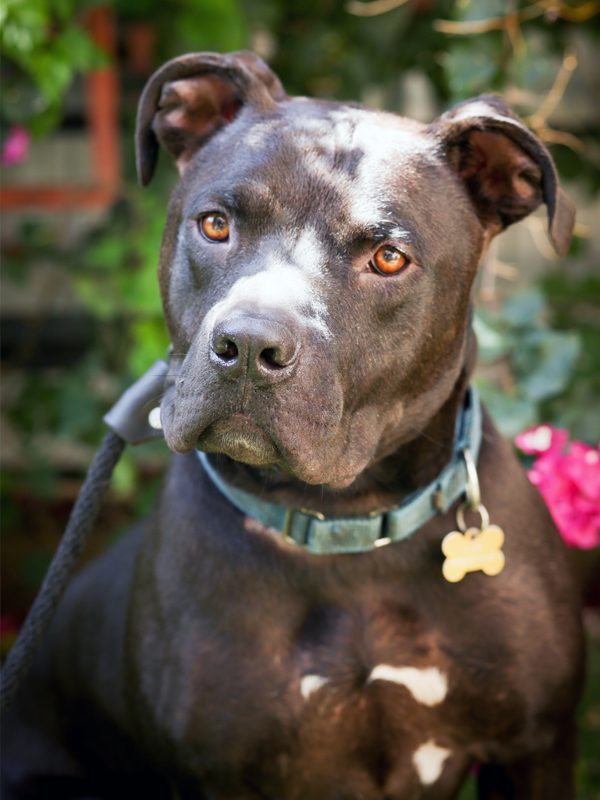 Around twenty years ago, Lori Weise started working at Modernica Inc., a furniture factory near L.A.’s Skid Row. On her drive to work she saw countless homeless people and their dogs — many being abused, suffering, and starving. An animal lover at heart, as well as a calm, strong advocate for justice, this reality led to her creation of Downtown Dog Rescue, which she began at the back of the Modernica factory.

Lori started by trapping strays dogs and talking to the homeless community she encountered. Walking right up to them and treating them with respect, she was consistent with her contact and friendship. She was even able to convince many that their dogs would be better off spayed/neutered. Lori was savvy about her efforts; she posted fliers in alleys and doorways offering free food for people and free surgeries for dogs via a mobile clinic, which she arranged. Her first clinic had a line two blocks long, and she soon developed a positive reputation on the streets. Furthermore, because homeless people cannot get a dog license without an address, Lori went so far as to allow Modernica’s address to be used to license as many as three hundred dogs. She became a true friend and pioneer to people who had no one.

Since then, Downtown Dog Rescue has paid for thousands of spay/neuter surgeries, has placed or fostered thousands of dogs, and has provided meals for many animals and the people who love them, whether they be homeless or just need a helping hand. After many years of working on Skid Row, Downtown Dog Rescue expanded to offer services in Compton, where living can be a challenge for residents, crime is eminent, and the euthanasia rate among pets is among the highest in Los Angeles. Regular spay and neuter clinics are held in Compton Park, for example, and in 2011 alone the clinic sterilized close to eight hundred dogs. The euthanasia rate for Pitbulls at the county shelter dropped thirty percent that year, proving that free-to-low-cost services are a solution to the problem. If not for DDR, this is an area that would otherwise go underserved, resulting in many animals suffering.

Another service to the community includes free dog-training classes with the help of dog trainer Cornelius “Dog Man” Austin. These weekly obedience classes are held at the Los Angeles Coliseum, teaching owners basic commands, agility, urban walking, and how to handle a dog attack. The class draws between thirty to fifty dogs and owners a week, providing practical suggestion for a balanced dog.

Perhaps best of all, Downtown Dog Rescue has grown since the late `90s from a couple of kennels to its own state of the art facility in South Gate. The early days were about rescuing mostly former guard dogs and countless pets belonging to the homeless community of Skid Row (some of whom are still residents), along with a goal of reducing the number of stray dogs on their block. However, over the years, the more than three thousand dogs who have once called DDR their temporary home have all gone on to find forever homes with new packs and families. And DDR wants to be able to continue that as much as possible.

By forming relationships with people in animal welfare, including the support of larger organizations, Lori has led DDR in collaborative efforts that have had profound positive impact, allowing the group to do much more than would otherwise be possible. When Lori developed a plan for an innovative approach to helping pets stay out of shelters, she called on her allies.

Best Friends Animal Society and Found Animals recognized the vision and listened to what was needed to work quietly behind the scenes allowing DDR to implement the ground-breaking Shelter Intervention Program. This program, which has inspired similar programs around the country, has prevented thousands of pets from entering the shelter in just a few short years.

When the time came to create a plan where DDR could buy a property instead of leasing one, keeping its programs centered on the community instead of fundraising to pay an expensive lease, Best Friends was the first to help make a dream a reality. The new facility, “Second Chance Kennels” enables DDR to save more lives because there is twice the amount of space as the back of Modernica’s factory, as well as more volunteers with access to the dogs day and night. The kennels enable DDR to train rescuers on how to get more dogs into playgroups, promoting play as a way to facilitate health and adoptions.

The new facility does not stop DDR from providing spay/neuter surgeries or community dog training; rather it adds to its established outreach and service programs by providing a place to temporarily house some of the Shelter Intervention Program dogs. Due in part to the generosity of Best Friends and the support of Found Animals Foundation, DDR’s vision for education and change in the communities that need them most is possible and full of potential.

Simultaneously, Modernica, the furniture maker, has grown from six employees to more than eighty, with Lori as its manager. Though the owners are not necessarily dog people or homeless activists, they believe in Lori and what she stands for. Her work has become part of the company’s culture.

One of the things that sets DDR apart from other organizations is its commitment to never talking down to people, and always empowering them. This starts with Lori and her genuine respect for all, and is manifested in various ways: she gives people a choice, even the homeless population; she involves pet owners by asking them what they can realistically pay for a service – she then covers the rest; she works hard to keep animals with loving families instead of assuming getting them out and into new homes is the answer.

The truth is DDR goes into neighborhoods that other groups do not go into, and because Lori is a one-woman army, her dedication has inspired thousands who have crossed her path. DDR has a solid team and volunteer base, leading to its growth and success. Donations and funding for DDR go towards services, and with a commitment to financial prudence, DDR consistently delivers its services at or under budget. The organization not only runs uniquely, with its out of the box approaches and programs; it also runs efficiently.

Most recently, Lori has written and self-published a book entitled, “First Home, Forever Home” which details her experience and journey, with the hope that by sharing her story others can take charge and assist their own communities. Because she is willing to do what it takes to get to the root of the issues for animals, and because she works in some of the roughest neighborhoods in the country and does not follow standard models, she is often asked to speak at seminars and conferences across the country.

Though DDR has come a long way, Lori still has several of the homeless people’s dogs she met in her early years. Many of the owners were men who ended up in prison or since passed. But when Lori promised them that their dogs would be safe and loved, she meant it. And she’s a woman who keeps her word. Here is to DDR’s new chapter in saving animals’ lives.