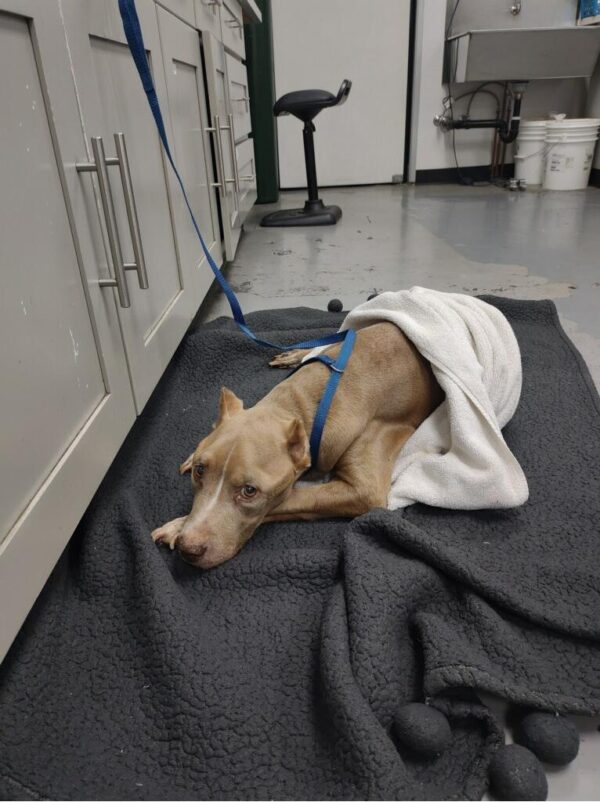 10 year old Shatto’s person, an elderly and disabled woman living on a fixed income, was feeling desperate and overwhelmed when she spoke to counselor Amanda.  She knew that she would not be able to afford an exam, tests, and treatment for whatever was making her dog sick.  Hoping Shatto would get better with rest, three weeks went by, but Shatto became weaker, losing so much weight, she looked like she might die.  Amanda listened, and assured her that she could help, but first, she would need to apply for a new program that DDR is part of called  AlignCare  Because she was receiving government benefits, and was means tested as living at our below the poverty line, she immediately qualified for this incredible benefit.

Shatto was so sick, a same day appointment was scheduled at Los Angeles Veterinary Center. Dr. Ramirez diagnosed her as having pyometra.  She needed an emergency surgery but not before she had a blood transfusion.  The following day, still weak, but stable enough to have surgery, the quote for all the care and hospitalization came to $1,913.32 which is a discounted rate that AlignCare veterinarians agree to as being part of the program.  AlignCare pays 80%, leaving Shatto’s family to pay $382.66, (20% of the quote).  Grateful for all the support, grateful that Shatto’s life would be saved, she agreed to pay the 20%.  In cases where the person cannot pay all or even any of the 20% co-pay, DDR pays on their behalf so that no pet ever suffers and or dies because the family could not come up with their co-pay. This was a complicated and intense case, therefore Amanda had a lot of contact with Shatto’s family, and learned that she was never spayed, even though she had been required by Animal Control to get this done.  Apparently, some months back, there was a horrible situation where the police responded to a call for help at Shatto’s home. In the excitement and stress of the situation, she was accidentally shot by an officer.  When she had surgery to remove the bullet, she could not be spayed because she almost died.  Months later, for whatever reason, her family never followed through.  A lack of transportation, a lack of resources, and or family dynamics, potentially all played a part in getting Shatto to the point to where she was almost dead, again.

As counselors, our role is not to judge, or dwell on the mistakes of the past.  We get the facts, and try our best to understand the needs of each client and their pet(s).  When it came time for Shatto to leave the hospital, staying neutral and not judging became a real challenge for Amanda, as it would for any counselors who thought that a dog had been abandoned at the hospital.  Calling repeatedly, no answer, no response to texts, the veterinarian also tried reaching out to see when the family would pick her up.  Stressed to the max, for 24 hours, Amanda never did get a response.  The next day, the adult son arrived at the hospital, claiming that his family owed nothing, and that he wanted to pick up his dog and go.  Rude would be word to describe his attitude, but so would powerless. People that feel overwhelmed, frustrated, who don’t know how to problem solve, due to a lack of tools to deal with their feelings. They often resort to threats, name calling, insisting that they are right, appearing to be superior, when what they may actually feel is shame.

Amanda attempted to call the mother, but was finally able to get the son on the phone to discuss Shatto’s recovery.  She wanted to get a better understanding of how things got so out of hand at the hospital when he picked her up.  First he refused to allow her to speak to his mother.  Maybe she felt as though DDR was now the “enemy” when in reality, we truly care. Despite everything, Amanda wanted to let the family know that they still can reach out to us in the future.

We wish we could write that this situation was a first. The first time someone we helped get through a life threatening crisis seemingly turned 180 degrees on us, and or the veterinarian who saved their pet’s life. It’s not, nor will it be the last.  Family chaos, lost connections, childhood trauma, addiction, homelessness, the list could go on and on to explain the reasons why people are often incapable of following through with an agreement.  We know that this doesn’t mean that they don’t love and care about their pet, especially a dog like Shatto who has lived with her family for ten years. Maybe they did the best they could with the situation that they are in?  To do this work, we have to continue to believe that people do their best.

If you support our work, please consider making a donation.