With the start of a new year, we identified a new outreach area that we are calling “The Alameda Project” Located in an industrial area where Florence & Firestone intersects with Watts, for blocks there are homeless people living in RVs, some running, others are more of a shell for the resident and their pet to live in. While others live in makeshift tents made of pallets and other abandoned building materials. Huge heaps of trash take up two or three car spaces on the streets. This is definitely a place where no one should live, yet too many call home. It’s a dangerous existence for both the pets and the people who love them.

On February 8th, after hiring an additional outreach counselor, Gerardo, who would serve as the point of contact for this targeted project, and a general map of the area that we believed needed services, he drove up and down the streets lined with RVs. Full of pet food and other supplies, Gerardo began making contact with some of the people, who he would discover had pets, and lots of them. Most of the people with pets were suspicious at first, but when they had a conversation with Gerardo, and understood what we offered, everyone on that first day was grateful for the support and resources. He made a promise to come back several times a week for an extended period of time. 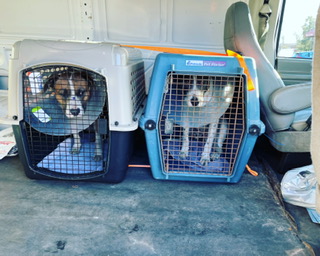 “Husky” and his father dog “D.O.G” after surgery 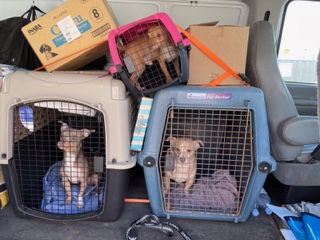 Three littles from one family on their way to get neutered

Gerardo went back, day after day, to form the relationships that would result in the following services that DDR provided in approximately 45 days.

Spays and Neuters = 8 surgeries all dogs
D.O.G. and his son Husky were the first two to be neutered. Followed by three male chihuahuas who all live with the same family, followed by another family of dogs; one male, and two females, of which one was in heat, and the other was pregnant.
Gerardo picks up the dogs in the morning, drives them in the DDR van to the animal hospitals, drops off, then picks up and delivers them back to their families at the end of the day. Sometimes, a very long day, as late as 10:30PM  DDR pays for all veterinary care.

Vaccinating pets on the street

First we invited everyone living in their RVs to come to our free drive thru clinic, but when no one showed up, we decided to bring the clinic to the people with pets in their vehicles. We hired a veterinarian to vaccinate, deworm, and apply flea and tick meds. This was an opportunity to get all the puppies and kittens their first set of vaccinations, and to book more spay and neuter surgeries.

Grooming – 2 matted dogs were groomed. Check out the photo of Guero below. When we met him on the street, his hair was so long, it was dragging on the ground, and we couldn’t see his eyes. 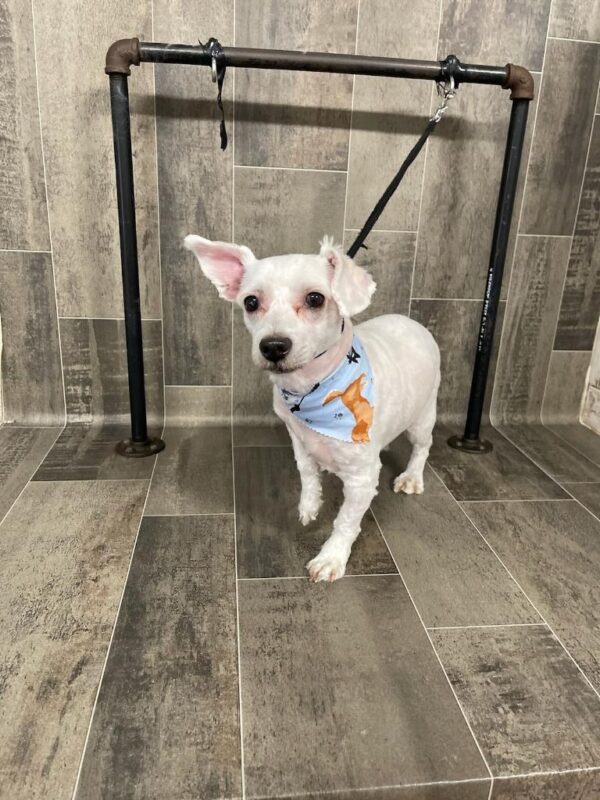 Two dogs, five puppies and one tiny kitten rescued: One of the saddest days for all of us is when we learned that there was a dog who had been hit by a car and basically left to die, locked up inside one of the RVs. Initially, we were going to make a report to animal control, but when Gerardo learned that one of our new clients was giving the dog food and water, and thought that we might be able to rescue the dog, we waited until the owner got out of jail. With the dog owner back, he gave us permission to take his dog to one of our veterinarians. Dehydrated and malnourished, he stayed in the hospital for a couple weeks. About three weeks went by when Gerardo received permission to keep the dog that we name “Pudge” 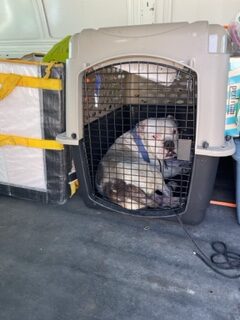 The day Pudge was picked up to go to the hospital 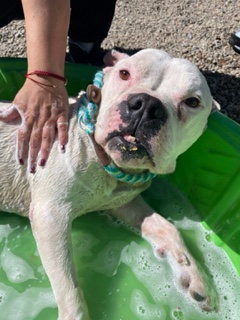 Pudge’s first bath at the kennel

IMG_7422 Watch Pudge on his first day at our kennel

We see the look of gratitude in Pudge’s eyes everyday, and is tail wagging is another sign that he is so happy to be living at our kennel. Possibly for the first time in his life, he has a dog bed, blankets, and doesn’t have to worry where his next meal is coming from, or where to find some water to drink.
Pudge is permanently handicapped, will always have issues with his hind legs, and needs a special adopter who can allow him to continue to decompress, and become the dog he was always meant to be. If you are interested in adopting him, please apply on our site.

Princess a tiny terrier had been found wandering the street, when one of our clients, who already had her own dogs, worried that she might be run over by a car, or worse. Plus she thought that Princess might be pregnant. She brought her inside her RV, and a week later, five puppies were born. Gerardo offered to help find a rescue for mama and the puppies. Thanks to the connections that counselor Amanda has with many rescues who have helped us with dogs over the years during shelter intervention days, a rescue agreed to take the little family, who are now in a foster home. 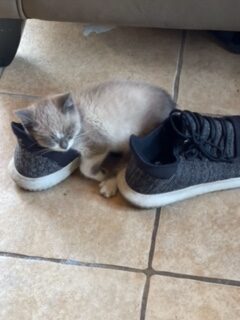 Rescued Kitten in his foster home

While vaccinating pets on the street, we drove by a pile of trash, and there he was, this tiny little kitten looking for something to eat. Gerardo put the van in park, walked over and calmly + quickly, scooped up the kitten, put him into a crate, and he ate a can of Fancy Feast! Covered in fleas, he had a nice bath at his foster home. The best news of all if that his foster family adopted him.

Playful Panda has made friends with many adoptable DDR dogs!

One dog is boarding while his person is in program Panda is a delightful, smart puppy, who is well loved by his person, who is on parole, and agreed to go into a recovery program. While Panda lives at our kennel, he will be neutered and microchipped, and given his final set of vaccinations. The plan is to board Panda, with check-ins with his person every two weeks.

In addition to all of the pet services, Gerardo works with the Los Angeles Homeless Services Authority (LAHSA) to enroll everyone who wants to move into transitional housing, of which a total of seven people agreed to register. Some had enrolled with LAHSA previously but services were received, and /or the case worker never returned. Working with Gerardo and LAHSA, there is a greater opportunity to see some of our clients move into housing with their pets.

Bringing resources and services offers hope to those who believe that they have been forgotten about by society. One person at a time, one pet at a time, one day at time, we move forward.

Donate to support The Alameda Project