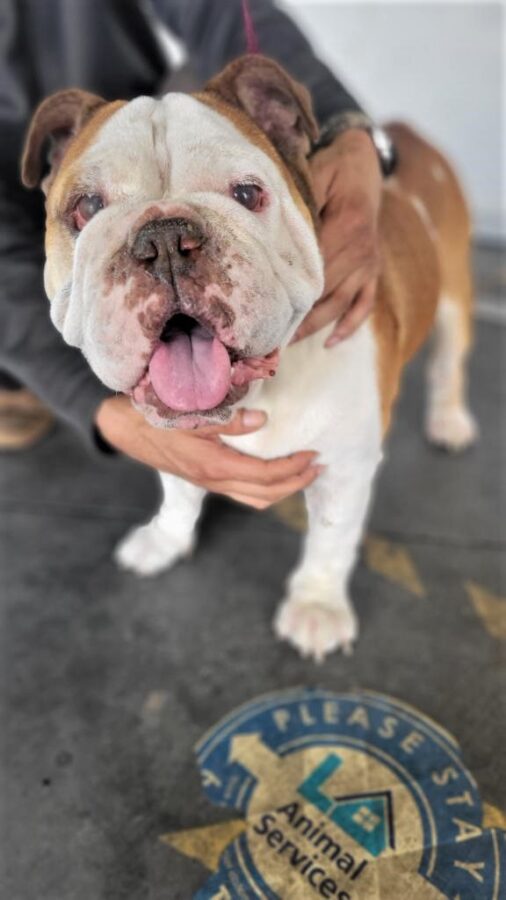 Last month, DDR counselors were on site at the South LA Shelter when a young man approached their table.  He had received a notice to “get rid of his dogs” or he would be evicted after living there with the dogs for ten years.  Counselor Amanda educated him about his rights as renter, and immediately connected him with H.E.A.R.T.LA attorney Dianne Prado.  Dianne was able to write a letter of accommodation for him, which would make it illegal for the landlord to evict him because of the dogs.

Thinking that everything was settled, our client, who we will refer to as “C” was about to find out that while he was at work, someone purposely let the dogs out of the yard, and they were gone.  “C” called Amanda distraught, explaining that the dogs were no where to be found.  He posted flyers, drove around looking for them for days.  Amanda was able to post the dogs on social media platforms, hoping that someone would recognize the dogs.

Five days later, someone on Pawboost saw Biggie at the shelter.  “C” went to the shelter, confirming that it was Biggie! There were so many tears of joy mixed with sadness.  Happy that he found Biggie but sad that his second dog was still missing.  We learned that the dogs were the only connection to his mother who recently died of cancer. Before she died, he promised his mom that he would always take good care of her dogs.  Because “C” was confident that someone had intentionally released the dogs, knowing that he and the dogs were not wanted there, he decided that the safest place for Biggie was in boarding while he searched for a new place to live.  “C” has not given up hope in finding his other dog.

Now the real work started, finding a pet friendly rental for around $1500 per month.  With the help of a volunteer Carol, who is a real estate agent, he was able to find an apartment that he could afford that would allow Biggie. The process of finding this apartment was like finding a needle in a haystack. After a applying for many apartments, his application was approved, and he could move in immediately. But then there was  the first, last months rent + a pet deposit.  He had enough money to pay his rent, but had no savings.

Working full time, and doing a side Hussle on the weekend to earn extra money, he calculated that he would not be able to save up an extra $2000 to cover his move in expenses.  We decided to pay his move in expenses up front for him.  Volunteer Carol donated the amount to cover the pet deposit.  “C’ was so grateful that DDR paid for Biggie’s shelter fees, all his veterinary care, boarding, and helped him to avoid becoming homeless.

November 29th is Giving Tuesday, and if you agree with our mission to support people and their pets, please consider making a donation.  YOUR donation will enable us to continue to be there for people like “C” who did not have family to reach out to in a time of crisis.  For many of our clients, DDR’s counselors and volunteers are their family, the ones that they call in a crisis, knowing that they will always receive support and resources.  #becausewealwaysneedhelpsometimes