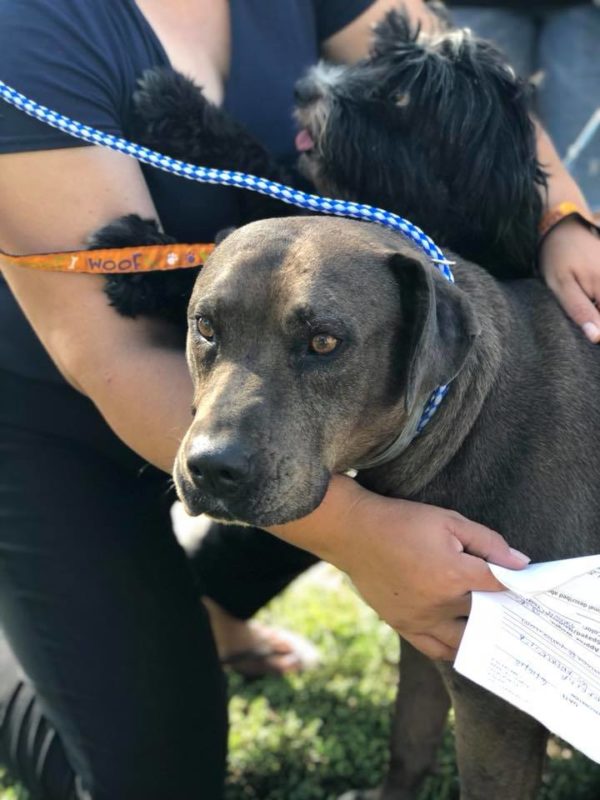 37 dogs and cats were spayed and neutered

Our June spay and neuter clinic was full, with enough pets on our waiting list to fill another mobile clinic. When volunteers arrived at East Rancho Dominguez Park in Compton at 6:10 AM, there were already pets waiting, including “Milo” a six month old shepherd tied up in the back of his owner’s truck bed. His owner had received a citation from an animal control officer, and wanted to make sure to get Milo neutered, vaccinated and micro chipped. While there wasn’t a spot for Milo on the mobile clinic, his owner was issued a free neuter voucher so that Milo will receive all the services he needs free of charge, and we discussed how dangerous it is to transport a dog in the back of a truck. Milo wasn’t the only big dog who showed up, looking for our help.
Many of our pet owners walk to the park, some don’t have telephones, like a gentleman with two kittens that we met last month. He didn’t have a permanent address or phone to make a follow up call for an appointment, but there he was, with both kittens, ready to get them spayed and neutered. In fact, we had quite a few cats at this dog clinic. In 2019, we set a goal of sterilizing more cats at our community dog clinics, a goal we are attaining each month. We wanted to help people like such as a kind woman who had been caring for a community cat. She had tried to catch her, but not before she had three litters of kittens. She finally was able to catch her, and thankfully, we spayed her. She told us that without this free service, she probably would not have been able to afford to spay this mama cat.
We met one dog owner who had an appointment, but had second thoughts, and was just about to leave the line, when the person behind her in line convinced her to get her dog neutered. Often, other community members have a much greater influence on helping a reluctant pet owner make the right decision. There was a very sweet poodle who had a hernia, and required more care than the mobile clinic could offer, we wrote a medical voucher so this dog could be spayed and have the hernia repair surgery, something her owner could not afford.
We met a young man with a male husky, who received a free neuter voucher. Talking to the owner, we learned that he had a female husky at home. He wasn’t sure about getting her spayed. Apparently, the two dogs had already had one litter of puppies, and that’s why he was at the clinic, to prevent more puppies. As volunteers, running these monthly clinics, we try our best to provide as much information about the benefits of spay and neuter, and allow the pet owner to decide. Overwhelmingly, pet owners want to take advantage of the free service. It’s pretty evident when we see a parking lot full of dogs and cats on a Sunday morning!
We are grateful to our partners Spay4LA, who runs the mobile clinic we use each month. Working together, in the community, we accomplish a great deal when we make the services free, easy to access, and consistent. #becauseweallneedhelpsometimes