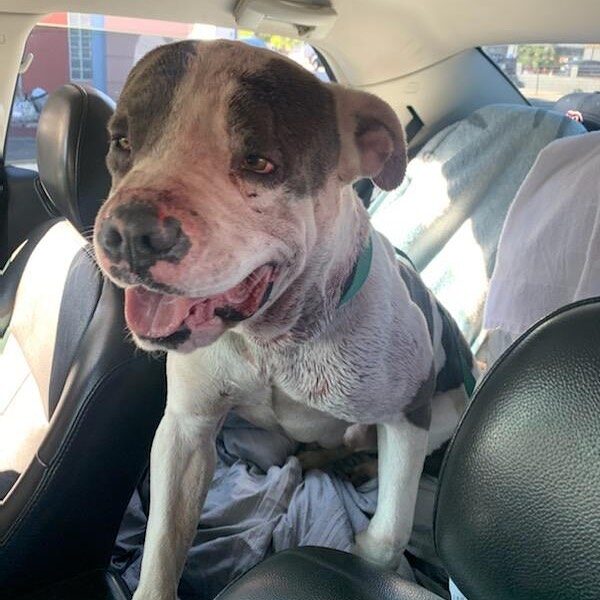 Last Wednesday was our day of service for pet owners who live in the Skid Row area. We are still on the corner of Industrial Street and Central Avenue, once a month, with a plastic folding table, some caution tape, and lots of pet food.  Some of the 110 pet owners, (65 dogs and 45 cats) who picked up supplies, are seen by DDR every month because we are their only connection to pet food.

Often, our counselors are confronted with emergencies such as a pet that has been poisoned or one who has been hit by a car. This week, a dog owner (who is homeless) walked his dog to our corner because he heard we might be able to help “Baby Active” who had been stabbed by a man with a knife, and attacked by the man’s aggressive dog.  I wish that I could write that meeting a new client with a pet that had been attacked by a dog, or stabbed was something new to us. It’s not.  Skid Row is an extremely violent place where people are living in survival mode 24/7. Looking at the bloody wounds on the Baby Active’s neck, our counselors remained calm and began calling partner animal hospitals to see if any veterinarian could examine him immediately. Dr. Vasquez at North Figueroa Animal Hospital came to the rescue.  With no appointment, Baby Active was loaded into a car and off they went to the hospital in Highland Park.

It was later that the entire story of how this horrible act happened.  Baby Active was resting inside their tent when an off-leash, aggressive dog broke through the tent and began attacking him. The owner of the aggressive dog pulled out a knife and stabbed Baby Active in the neck.  I could go into more details, and post some graphic photos, but I won’t because this post is not about Baby Active being attacked.  The purpose of my post is to explain to you, our supporter, about the street code and how it prevents justice from being served.  Not only for pets, but mostly for people who are attacked, raped, or terrorized physically and mentally while they live on the streets of Skid Row.  Some of you reading this post may think the people living on the street want to be there, that it’s their choice, but is it?  Despite what you feel about the “Homeless Situation” or as I call it, “The Humanitarian Crisis”, you may think that there is help for anyone who wants it.  Help is complicated, and someone has to feel safe enough to accept it. Using Baby Active’s case, let me walk you through what happened next.

As soon as counselor Amanda texted me that a Skid Row dog had been stabbed, and was taken to the hospital for surgery. I texted her, and then called for more details.  Since we had photos to document the injuries, a veterinarian to document that Baby Active was stabbed, and a very involved and concerned dog owner, why couldn’t we file a report of animal cruelty and have the perpetrator arrested?  We know that this type of animal cruelty would be charged as a felony, but we would need the owner to make the report.  Amanda and I both knew that making a report was not a sure thing.  In fact, the odds were pretty good that the owner would never make any type of report to LA Animal Services or LAPD and not because he doesn’t love his dog.

It was just last month that I had a dialog with General Manager of Los Angeles Animal Services, Brenda Barnette, about potential animal cruelty on Skid Row. Too often, crimes are reported; third or even fourth person, but the owner of the dog or cat will not file a report for fear of retaliation to their pet or to themselves. Believe me, this fear is real. I sent Brenda an email about the potential case and she replied immediately, stating she would definitely pursue an animal cruelty case if the owner would cooperate.  What I needed now was the owner to speak to an officer and be willing to testify about what happened. My emotions were really mixed. I had so much anger for what I saw in the photos. How could anyone do this to a defenseless animal?  While the logical side of my brain tried to distance myself from my emotional reaction, and continue to gather evidence for a potential case. I have to be honest here – the anger controlling part of me did get the better of me, at least for awhile.

I sent counselor Amanda a text that read, “Do you think the owner will want to file a report?” Her text back to me was a realistic, “I highly doubt it. You know the street code.”  After doing this work for more than two decades, yes, I know the street code. Knowledge of the street code has likely saved my life many times.  Does knowing the street code make it easier to understand why a dog owner would not want to file charges, against his “neighbor” aka a guy that lives in a nearby tent on the same street as his tent, where Baby Active lives with him?  No, it does not. What this knowledge does for me is to take the “I” out of the equation as in, “I” want justice for Baby Active, “I” want the perpetrator arrested. “I” don’t want this dog to go back to living on the street.  “I” wish Baby Active’s owner would agree to leave the street with his dog and go into Bridge Housing. They deserve a better life, and I want them to have a better life. I can’t begin to imagine what their life is like nor can I know what is best for them.

After taking a few deep breaths, closing my eyes, and being present, I remained open to all possibilities, not just the ones that I felt would lead to my concept of the best outcome. I asked myself, Do I really know the best outcome for Baby Active and his owner? No, I do not. I do not get to control someone else’s life and I certainly do not know what path he is on or how it will turn out.  Thinking about this more, I began to calm down and waited for an update on Baby Active’s condition. I have to constantly remind myself, on a daily basis that as in this case, I can’t control the outcome, but I can control how I react to it. Later, Amanda updated me that surgery was successful and he would spend a couple days in the hospital.  His owner contributed $100 towards this care and DDR paid the balance. No call back from Baby Active’s owner, and because I had chosen peace and hope, over control and chaos, I remained hopefully that he would connect with Amanda.

Two days later, Baby Active was picked up from the hospital by his person.  All of Amanda’s calls and text went unanswered. It was obvious there would be no report of animal cruelty filed because the owner had made his decision to remain silent and go back to living in his tent with the dog that he loves.  Will they be safe? If he remains on the street, probably not. Is this right? It depends on how you define “right”. For this dog owner, “right” equates to not being a snitch who makes a report because his reality is that the perpetrator would get arrested and would likely wind up right back on the street in a tent on the same street where he and Baby Active live. The outcome would only be bad.  From his perspective there were no other options for him. Remaining silent means that he can continue to live and his dog gets to live.  For how long? No one, not even me – the dog rescue lady who would love to control everything and make things fair – knows how long.  Life on the street is never about fairness, it’s about daily survival .

In times like this, all we can do as counselors to practice self care is to think about all the people and pets who have moved off the street, out of Skid Row, and into permanent housing. In many cases, we have the great privilege of witnessing the ongoing progress that clients make, and continue to strive for. One thing I know for sure, getting off the street is never a straight shot right into an apartment.  There are phases and ultimately no one can advance to a phase where they want more for themselves and their pet without making that initial connection that develops into an ongoing relationship.  I hope Baby Active’s owner knows that he has made that initial connection with us and, if he changes his mind, he can call Amanda’s direct mobile number, send me a text anytime day or night, or find us next month at the corner of Industrial and Central with a folding table placed behind a line of caution tape.

Thank you for reading this post, and for being open to what may appear to be an unhappy ending that is really possibly just the beginning of a journey to a better life as he defines it.  Let me know what you think, you can always email me at Loriweise@gmail.com I continue to share because of your support, which is part of my recovery. #becauseweallneedhelpsometimes